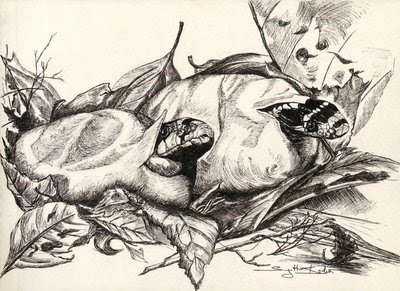 A4 size; Black pen on paper; Using a technique of ‘hatching’ and ‘cross-hatching’ for the King hatchlings ! This technique is done by drawing closely spaced parallel lines to create tonal or shading effects.

After having glued myself to Bangalore for a few months, immersed in painting, I finally got a chance to take off to the Western Ghats, where (my brother, Sandesh) and the filming crew were shooting a documentary for National Geographic about King Cobras! The crew, along with Gowri Shankar and the many volunteers at ARRS (Agumbe Rainforest Research Station) had put in many weeks of radio tracking the King, observing and recording its behavior and filming the nest building in the wild. Now, it was time for the baby kings to break open their shells and come out into their whole new wild world. And I was lucky enough to land up at Agumbe right in time for this ! It was early August.

I sat watching the heads pop out, everything in slow motion, taking their own sweet time to absorb their new surroundings and venture out boldly, leaving behind their safe haven. With their heads out, they stood in the same position, sometimes for hours together, as if everything had been paused. Thus giving me ample enough time to sit in front of them and doodle rough sketches in my field-journal. And presented above is the final sketch of the baby kings hatching. Made this after i got back to Bangalore.